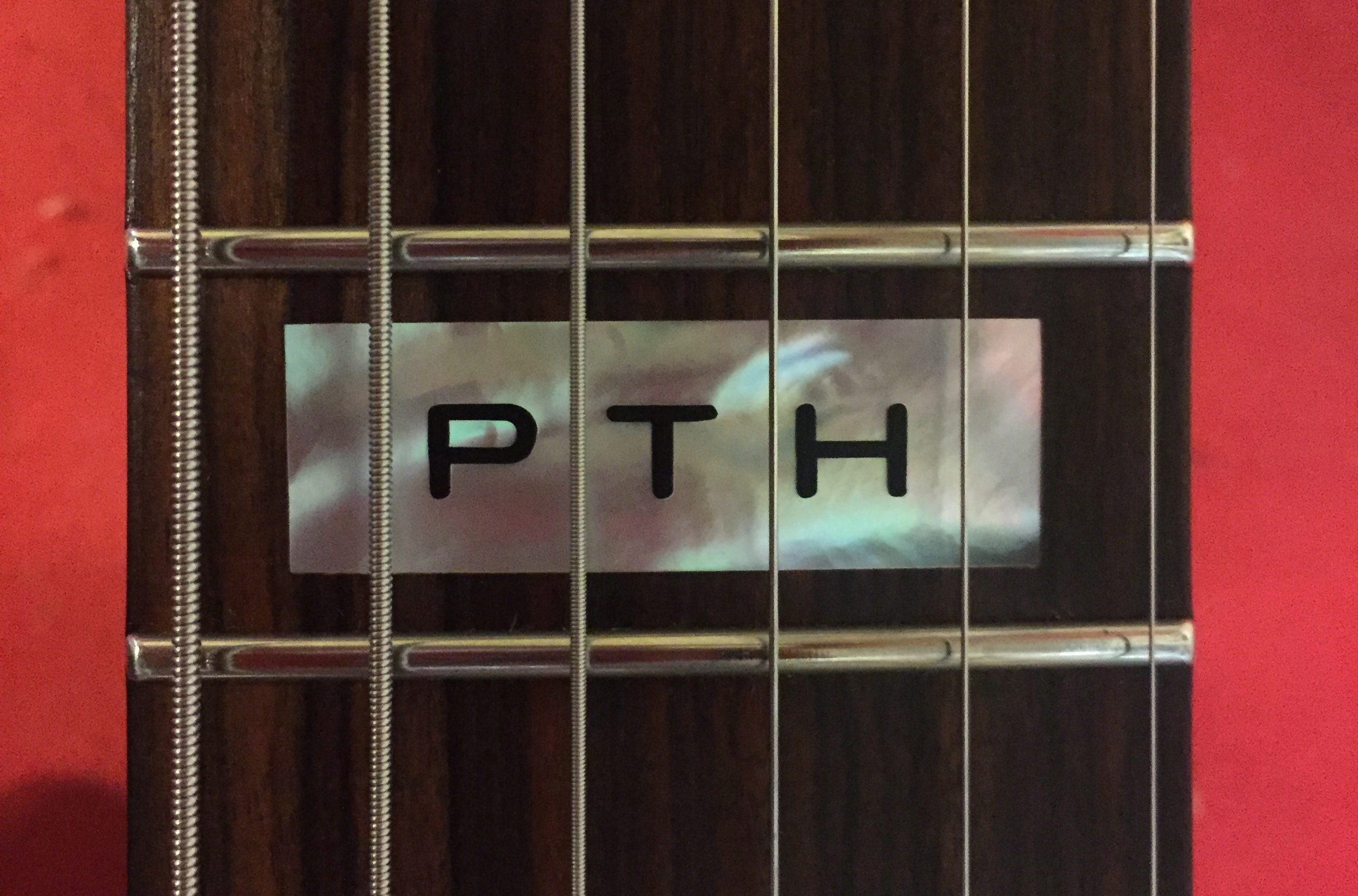 Tour Prep With Protest the Hero!

For fans of progressive metal, Protest the Hero is a household name, especially for Torontonians.  As a member of an up-and-coming band in the genre, I was stoked when Luke Hoskin asked me to prepare the bands’ instruments for their upcoming tour with A Wilhelm Scream, Cyclamen and my friends in AURAS.  We were on a VERY tight deadline before the band needed the instruments ready for their final rehearsals before they leave for tour in a few days, so I thought it would make a neat article to see how I prep instruments for a pro tour.  The instruments will be needed to perform at a high level, night after night, AND withstand travelling across Canada in December and January.  So without further ado, here’s some nice pictures and an explanation of some of the work that had to be done to get these instruments ready. 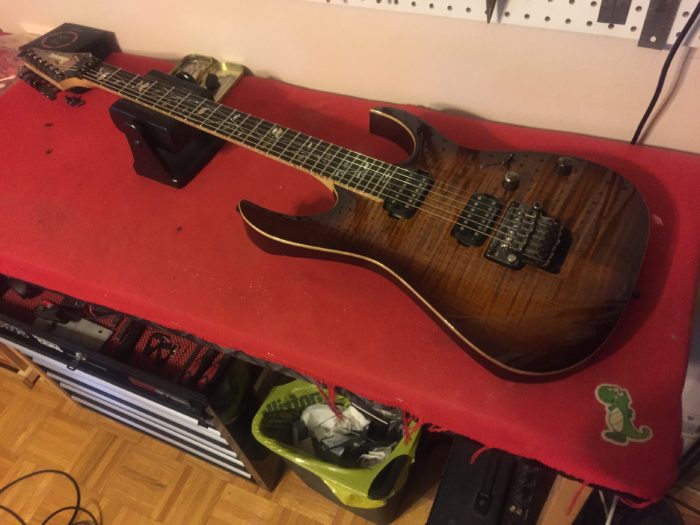 Like all of the PTH axes, it’s tuned a half-step down and strung up with D’Addario NYXL 10-52.  This instrument hadn’t seen any use in quite a while, so it required the most work.  First off, the barrel jack was dying (as those jacks tend to do… check out this article) but since the cable access was one of the offset, up-pointing ones (seen below), there wasn’t enough time to retrofit it with a switchcraft jack and mounting plate. 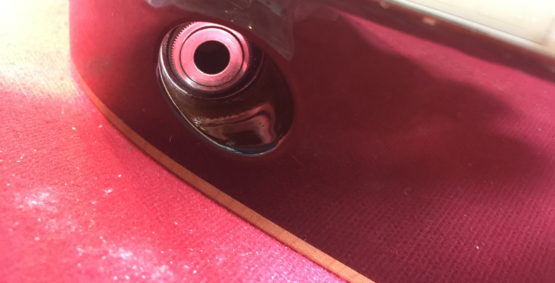 So instead I replaced it with a brand new barrel jack, that will last the bands winter tours before we find a more permanent solution. 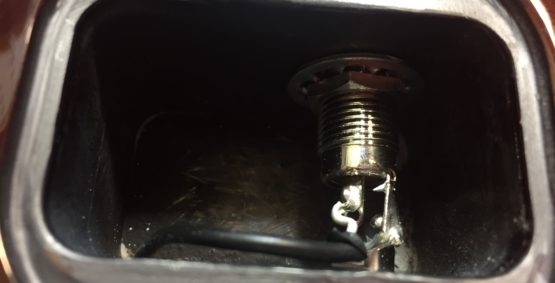 The next modification that had to be performed on this guitar was blocking the trem.  Luke doesn’t use the whammy bar at all, so we’re going for a full block.   But these Ibanez trems have the complicated spring systems that can be tricky to block properly. 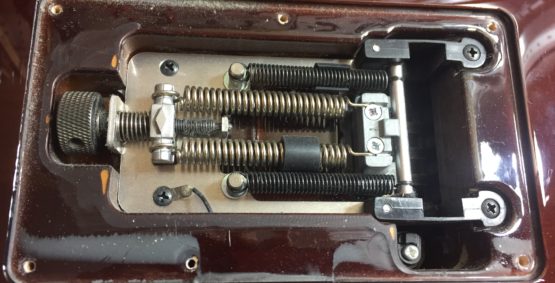 So, in comes the cavalry; a box of 1000 old business cards from when I worked for Long & McQuade. 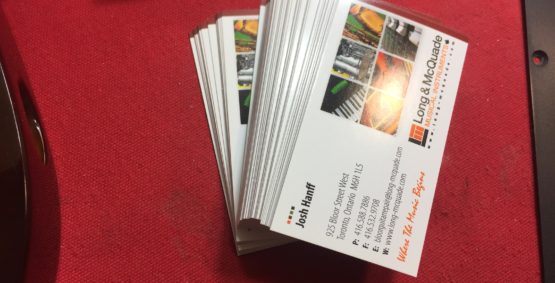 After some time with a pair of scissors, we ended up with this: 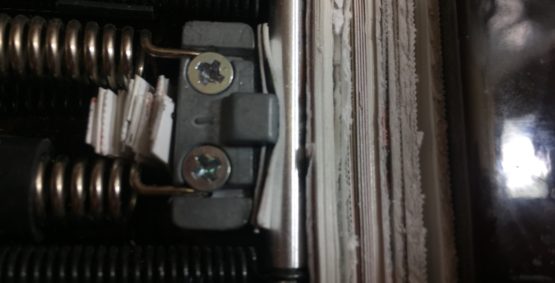 Again, not really a permanent fix, but she’s not going anywhere for the time being, and when the band is done touring in the spring I can find a more permanent solution that will do a better job of transferring energy from the strings to the body of the guitar.  Once the electronics were fixed up and the bridge was blocked, I set up the guitar with some pretty low action, ready to shred.  The high E string is 3-3.25mm from the 12th fret, and the low E is about 4-4.25 mm from the 12th fret.  If those numbers mean anything to you, you know that’s on the lower side of things for sure.

Up next was Luke’s red Ibanez RG Prestige that I had worked on a few months back. 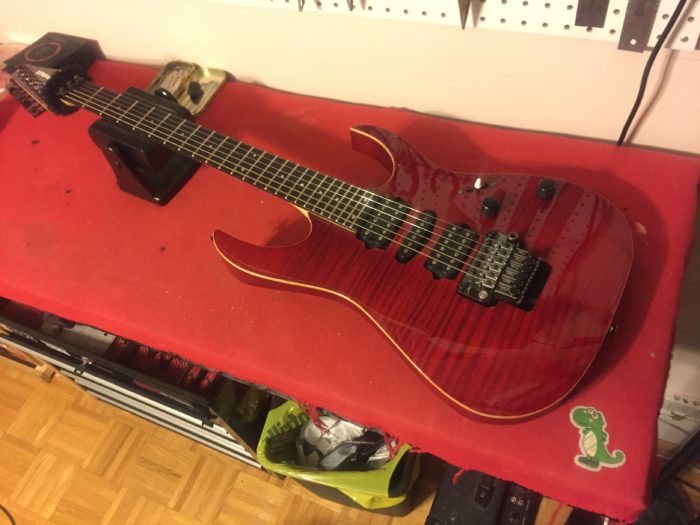 Since I’d worked on this guitar so recently, there wasn’t a lot of mods to be done, but I checked the electronics, making sure the jack wouldn’t be cutting in and out on stage.  One of the main concerns with guitars used in this genre is sympathetic vibration of the strings or springs in the back of the guitar.  To help cut down on this, I fitted all of the axes with a foam pad under the strings to keep them from ringing out past the headstock. 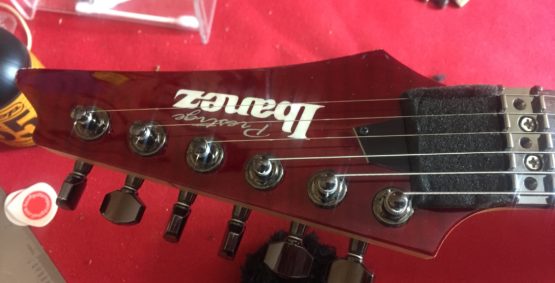 And then with Luke’s scrunchy on top, these strings would be dead silent. 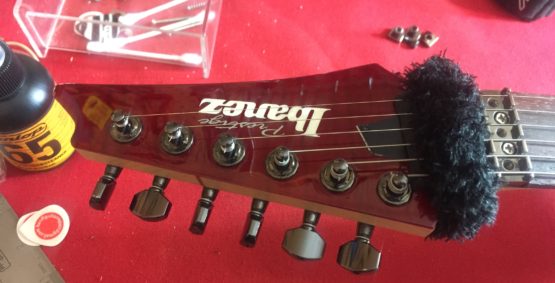 Each instrument was also tagged and dated with the specs of the setup. 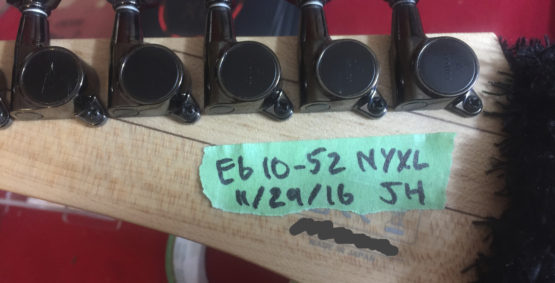 The last of Luke’s RG’s is another beauty MIJ blonde that’s set up in drop Db. 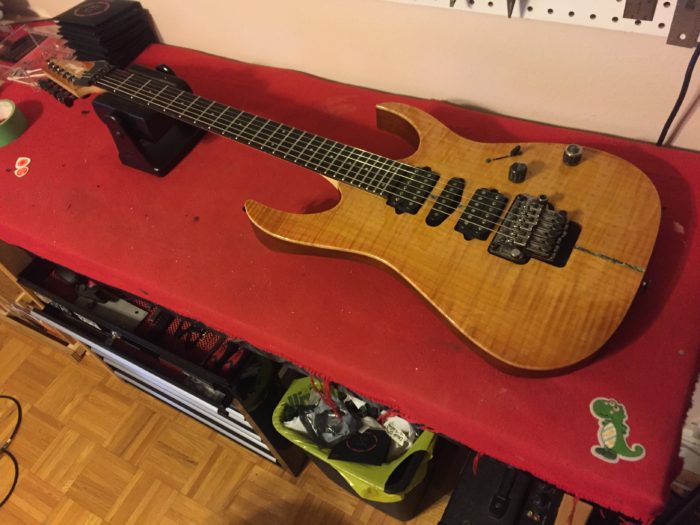 This one was strung up with an NYXL .056 for the low Db to provide some added tension for the drop tuning (take note, kids!)

Up next were Tim’s axes, first his custom Russian-made Padalka. 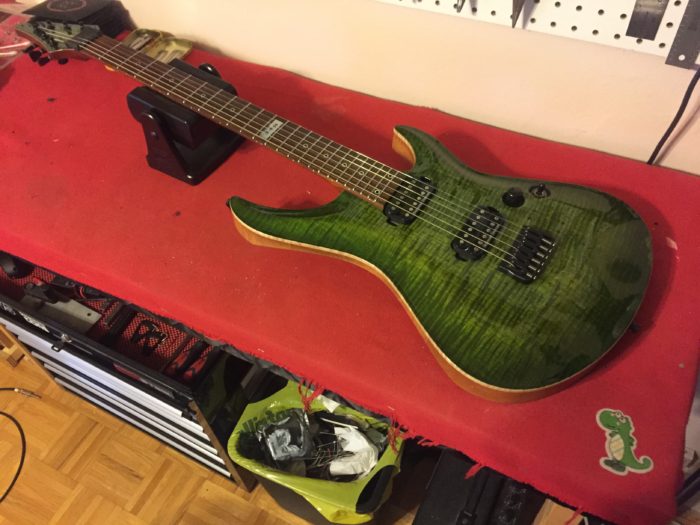 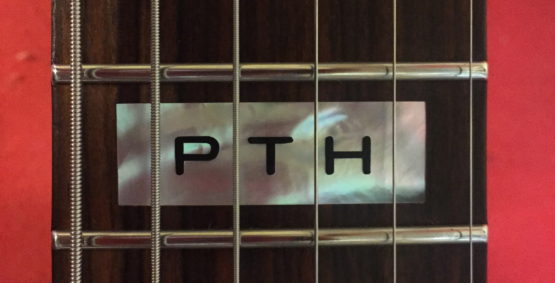 Like previously noted, the name of the game was to eliminate all unnecessary buzzes, rattles and vibrations to keep the PTH set as tight as possible.  So all nuts and bolts were tightened up, especially the tuners, which vibrate loose over time. 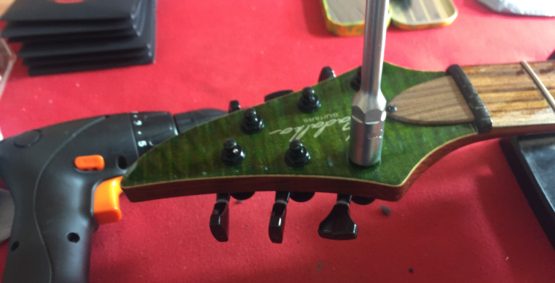 Also, to help deal with a cross-Canada trip in the middle of winter, all the fretboards were thoroughly hydrated with lemon oil to keep them from drying out as best as possible.  The transition from warm interiors that are dried out from furnaces/heating systems to the cold outdoors can wreak havoc on a guitar, so, an intense hydration will give these instruments their best chance at survival. 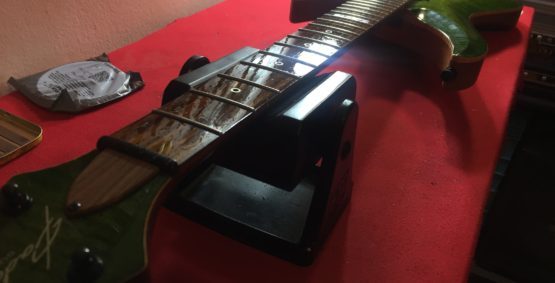 And Tim’s second guitar he uses on tour is his ESP Horizon, a real beauty. 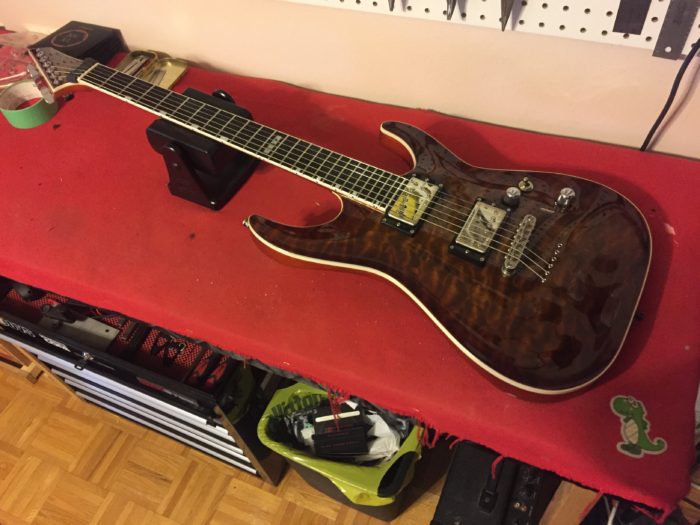 Tim’s guitars had to be set up a little differently from Luke’s.  Since Tim doesn’t have a dedicated drop Db guitar, his low string was intonated slightly flat, so that when retuned to drop Db from Eb standard, the string will sit slightly sharp to compromise.  (Instead of being perfectly in tune in one tuning and way out for the other).  Also, since Tim uses two very different guitars (unlike Luke’s family of RGs), he specifically mentioned that their output levels needed to be matched so one guitar isn’t significantly louder than the other.  This is just a matter of adjusting pickup height until the guitars seem to be at the same volume with both clean and dirty tones. 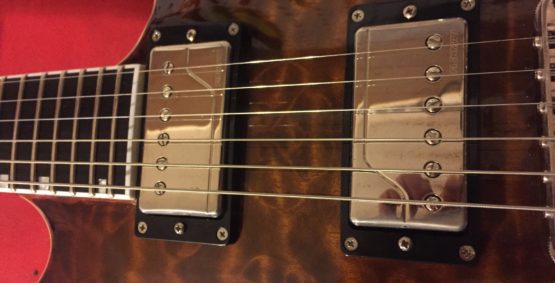 This is also the first guitar I’ve ever played with the Fishman Fluence active humbuckers, and I have to say they sound GREAT.  I was really blown away at how full they sound.  They almost made me reconsider my stance on active guitar pickups, until I remembered that they were powered by a hard-wired rechargeable battery that needs to be plugged into a mini-USB to recharge.  No thanks, Fishman.  The last thing I need is yet another USB powered device for me to lose the charger for. 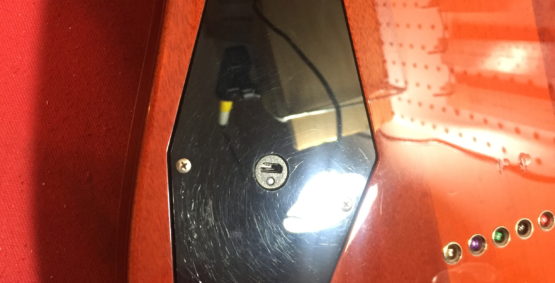 Last, but DEFINITELY not least, is Cam McLellan’s green Spector five-string.  On top of all the PTH stuff, this bass was also used on Intervals’ The Shape of Colour and more. 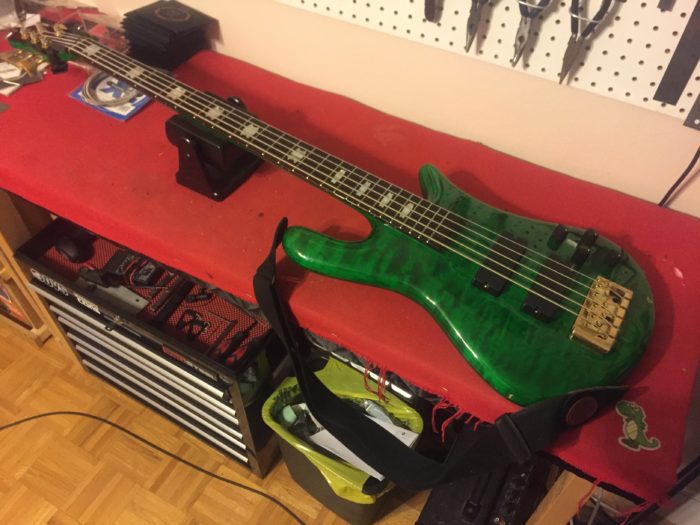 Built by Spector for Arif originally, this bass has been through the wars and has it’s fair share of scars, as it should. 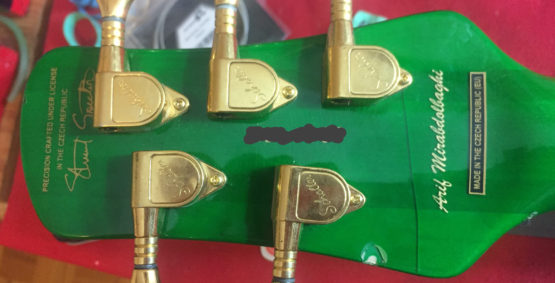 Like all of the guitars, I eliminated as much buzz and rattle as possible by adding some foam under the strings at the headstock and tightening up the tuning machines.  Basses are even more susceptible to having these nuts vibrate loose over time. 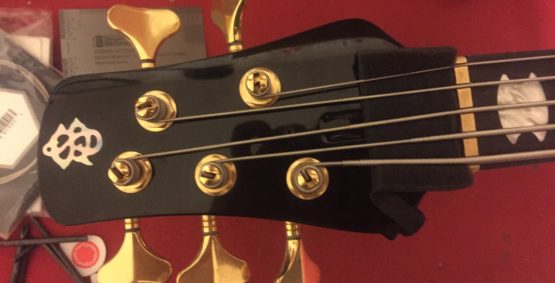 And that’s it!  After a twenty-four hour whirlwind, Protest is ready to hit the road for their cross-Canada trek!   See you guys at the Toronto show at Danforth Music Hall Dec. 19!